Zombie Tap (from the Zombie musical, including Prelude)

(SPOTLIGHT on face of NARRATOR. Skeletal, ominous, grinning and clacking jaw. Hooded. The archetypal Death figure. Scythe, if you want)

I’ll give you some advice that I was taught once by a prodigy:

He won’t know who to trust.”

You’ll find me in the breaths between the mutters of profanity.

I’m there inside your curses and your hallowed mediocrity,

And best of all for most of you, you’ll never get a sight of me

I watch you turn to dust.

Attractive though you think you are, your self-obsession just bores me,

I’m way past all that squelching silliness of sexuality,

My desiccated dreams are as repellent as morality.

Perhaps you smell their musk?

So here’s our tale of odious manipulative frippery,

Take time to check your chains are loose enough to clap our reverie.

Your prayers are out of date now. Are you burning for eternity

Beginning with our show?

And safe, still night, there is no time to talk of ravished royalty;

There is no underaged princess to sing to on her balcony,

No Capulets to copulate, no Montagues tonight. My fee

Oh, by the end of this torment, you’ll not have learned a thing, you see,

And if you’re wondering who granted me this rash authority

Just look into the mirror and consider this philosophy

I think you probably know.

Keep up if you are slow.

This is the status quo:

(syncopated flapper jazz, descending vocal melody by semitones, end of each (a capella and spoken) third line has either a clean ‘2-3-4’ break or a jazzy resolution back to the fifth then down to the root for start of next verse) I just realised it also sounds a bit like the verses of Something 4 the Weekend by SFA so that’s a good reference to the music if and when I write it bye ta

…and in the aftermath of the apocalypse, the nuclear winds that had blown destruction and death upon the planet whistled at their achievement before fading away

Left behind was darkness personified. A landscape where all withered; poisoned plumes of dust dulled the sky, and all was dead.

And yet, in the distance, something stirred; an underside revealed itself, inexorably belching in the face of this madness. An apparition, ghastly and neither live nor dead, began to snide into this new non-world. Ribboned and rotten skin flapped free upon its glistening, horrendous skull as the monster began to address a world in which all hope was gone, a world perhaps in which the monster was all that could ever stir, a cursed landscape where time and energy had curved in on themselves once and for all

And the monster said:

Come, come, whatever must you think of me?

And did I ever tell ya oh that all my best friends are cats?

I rue the day that you were ever sent to me

I’d rather have placenta and the comfort of lobotomy

My feet are cursed, you know my friend it seems to me

They’re twitching of their own accord, and oh it feels to me

Resounding through the ages to the beatcount of eternity

His grave is burnt, I have to say that one was me,

There can only ever be a-one-king of tap

One two three four, now you’re getting good at that

That’s right now, let your feet ring out the scat

Join with me forever in the dancing of the zombie tap

Verse 1: maj7 shape on EAD, starting on F# and up by semintones x3

3 back to V1 add B7shape plus maj 3rd little finger on G string. Syncopate rhythm around that for a few bars (ie stop time, for the zombie tap solo)

Same again, except longer solo and mess about with some other chords like D (maj7 add MIN 3rd). All is in 4/4 but lots of space for tapping solo, and interjections on offbeats – different ones each time – with the music.

Then into 3rd section as before, repeat 3rd (zing zang), maybe with syncopated stop time tutti at the end, strong and final ba-ba-baba-BA! Type thing

Underneath the Zing Zang some spoken word:

And things began to stir, and bones creaked, and the grounds cracked from below as an army of tattered, sightless, crumpled and undead heathen awoke

And as the earth span ever faster on its axis toward the sun that would soon engulf it, this batallion of zombies roared and rampaged and tapdanced in a perfect Fibonnaci sequence

And the ancient one, Barbelo herself, saw what her son had done, and at the last, forgave God the sins he had wreaked on a world he lost control of within hours of creation. Maybe the lad was learning, after all. 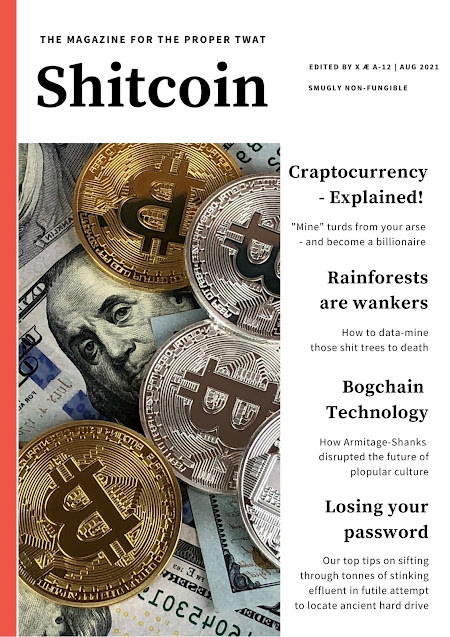 Vol-au-vents in heaven with the Christmases

I bought some marked-down camembert and it's lovely, but it stinks. It's really not a nice smell at all and I might have to chuck it away.

There's been no footy for a year and I miss it a lot. When it starts again, the terraces will be short of more than a few people. Permanently. It's sad and it's inevitable and it's unfair and it's just how things are.

Here's a prediction: when travel opens up again, the Nantporth Squatters will suddenly sign a ton of players for a ton of cash they've suddenly accessed.

It's so tiresome. And it's going to continue.

I have two requirements:

To always cascade through higher planes

THESE ARE NOT NEGOTIABLE

Your voice is animalistic

Coming down the ethereal wires

Coming in the grrrrreyskale skies

And let IT always be known:

That I am Impressively Hip To The Beat.

I will NOT be a follower of passion anymore

I am the WORST OPPORTUNIST OF THE MALL

And Never Again (TM) Hold Me

And we shall NOT SPEAK OF THIS AGAIN

I got a weird message on my Zoom today. Not sure what to make of it tbh

SHIT THE BED I MUST BE COMPLETELY BUGGERED!!!
Posted by Joe Shooman at 08:30 No comments:

Don't tell me it wasn't yesterday

It was only a year or two ago, wasn’t it?

Running around a cabin on a campsite in Denmark

And annoying the shit out of Sam?

Wasn’t it? We all had our tops off.

You never needed an excuse for that.

Working on a building site one summer

And showing everyone your biceps.

Yeah alright. That was a while back.

Beckham and you had the same hair.

Kinda. And the more drunk women got

The more you could stand in for him.

Hung over on minibuses through Wales.

Drinking through the hangovers toward footy.

Calibration is everything. Just find that sweet spot

Between merry and fighty and happy and sleepy.

Well. That was a few years ago I guess.

But how do you reconcile it

When it feels so raw and real and recent?

Maybe that’s the key to carrying on.

I saw you online the other day

Alongside loads of others, twatting about.

I could have messaged you about fuck all

That it would be the last time that we talked.

It’s inevitable, but it’s too early,

And it’s beyond unfair, and tragic and all

Those words that are hollow.

I wonder, when you put on your Bangor shirt,

Last time, that you knew

It would be the last time. Maybe you did.

There are always people left behind.

And we wonder why you and not us.

Why us and not you. But no answers

Come and we shout silently into the void.

A liminal crossing for an eternity or a moment,

Try and tell us about the ghosts, because

It is scarier to think there are none.

It fails. Language. It fails.

There is too much to process.